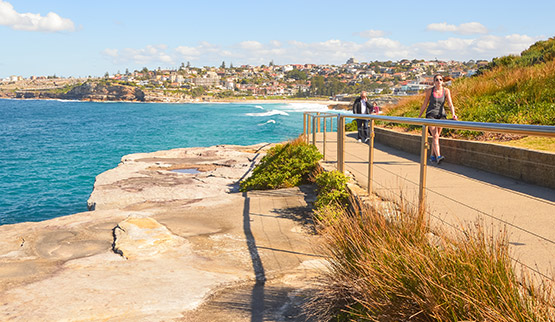 The Bondi Beach to Bronte Beach walking trail - one of many great scenic walks in Sydney.   Picture: © Sydney.com.au


Sydney is the best city in the world for walking because of its spectacular harbour and coastal walks, and there are probably more defined walking paths in Sydney than any other city in the world.

Walking is also the best way to see Sydney's main attractions, which are mostly within the inner harbour and close to the Sydney CBD.

We've structured this part of the Sydney.com.au website to give you an idea of what walks you can expect to do given the length of your stay. We've also focussed on walks that will reward you the most with stunning views and places and items of interest.

We've included lots of pictures to give you an idea of what you can expect visually from the walks.

CITY WALKS
One, two or three-day CBD walk
We've structured this city walk so you can do it in stages.

The Rocks Walk
The most interesting of the city walks and one not to be missed. This takes you through the area that was Sydney (and Australia's first) first settlement and includes fascinating laneways and small passages that began life as soldiers barracks and portable hospitals, but which are now host to a network of appealing cafes and shops.

Walk across the Sydney Harbour Bridge
This walk takes you across Sydney's famous bridge, from The Rocks to Milsons Point, with stunning views of the harbour and Opera House.


LOWER NORTH SHORE
Kirribilli to Lavender Bay
This short walk takes you from the Kirribilli ferry station at Jeffrey Street around the foreshore and under the Sydney Harbour Bridge, past Luna Park and on to Lavender Bay with the option of a visit to Wendy's Secret Garden.

MOSMAN HARBOURSIDE WALKS
Our favourite walks because of the natural beauty of the foreshores on the northern side of the harbour, much of which is locked up within the Sydney Harbour Na\tional Park, and the unparalleled views of Sydney Harbour. These walks also provide access to restaurants and cafes hidden away in some of Sydney's most picturesque settings.
Taronga Zoo wharf to Bradleys Head
Bradleys Head to Chowder Bay
Chowder Bay to Balmoral Beach

DOBROYD HEAD
Crater Cove Walking Track
This walk takes you to a rarely visited cove in Sydney Harbour that is the location for a series of secret historic stone and timber huts, some of which date back to the 1920s. People lived in the huts, hidden from the greater Sydney community and enjoying million-dollar harbour views, up until the 1980s when the cove was declared part of the new Sydney Harbour National Park. This walking track is not signposted and the huts are mostly unknown to Sydneysiders.