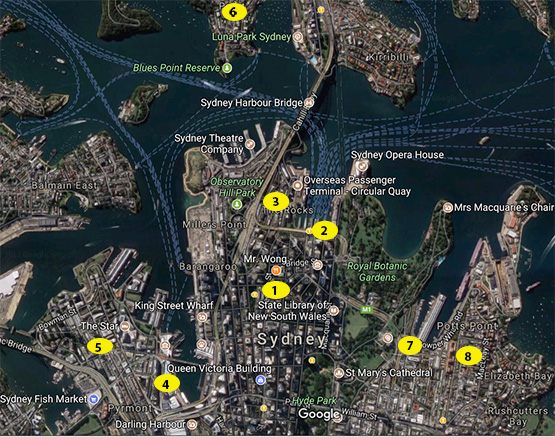 
Guide to where to stay in Sydney
- hotels, apartments, hostels and more

Below we've provided a summary of the most popular locations.

This is the central business district of Sydney, which is the very heart of the city and a location where you can find a good selection of five and four-star hotels, three-star hotels, apartment suites, and backpacker and hostel accommodation. The lower half of the CBD is within easy walking distance to the main Sydney attractions, including the Sydney Opera House, Sydney Harbour Bridge, Darling Harbour, The Rocks, Circuar Quay and Royal Botanic Garden.

When choosing a hotel or apartment in the CBD, try to get as close to the bottom end of the city (towards Circular Quay and The Rocks) as you can as this is the central point for embarking on most tourism activities and sightseeing in Sydney. If you stay down this end of the CBD, you won't need to use public transport to visit the main attractions.

In selecting a hotel, apartment or hostel, be aware that the closer you are to Circular Quay, generally the more you pay.

Circular Quay is the prime part of Sydney in which to stay - if you can afford it.

Circular Quay is situated at the bottom of the central business district and is a few minutes walk to the Sydney Opera House and The Rocks, and about 10 minutes walking distance from the Sydney Harbour Bridge.

If you could pick any place to stay in Sydney, and price wasn't an issue, this would be it.

From here you can easily walk further afield to Walsh Bay, Barangaroo Reserve and Darling Harbour (to the west) or the Royal Botanic garen and Mrs Macarthur's Point (to the east).

Circular Quay is the city's main ferry terminus, from which ferries depart for all points of the inner and outer harbour. It is also a main train station on the underground loop, linking the city's train and ferry networks. It is the central starting point for most major tourism activities in Sydney.

There is a large selection of 5-star hotels in this area either on the harbourfront or else overlooking the harbour, and a number of 4-star hotels as well as apartment hotels. To find a 3-star hotel, you have to venture further afield - either into the Sydney CBD or The Rocks.

The Rocks is just a few minutes walk from Circular Quay and it also has some exclusive hotels, but there is more value in this area in the number of 4-star hotels that can be found. There is an excellent backpackers hotel here.

The Rocks is the most fascinating part of Sydney as it is the site of the first settlement of the colony in the late 1700s.

There are buildings within the small district that date back to the early 1800s and the area is renowned for its small, mysterious laneways that wind their way through the street blocks.

If you prefer to stay somewhere that has character and history, while still being within close proximation to all the sights and sounds that Sydney has to offer, this is the place to be.

Sydney's no.1 tourist market is held in the streets of The Rocks every weekend and there is usually a cruise liner tied up at the nearby Overseas Passenger Terminal.

Darling Harbour is a tiny harbour adjacent to the centre of the Sydney Business district renowned for its restaurants and cafes and tourist attractions.

There are restaurants and cafes of every description and ethnic flavour at Cockle Bay and Kings Street Wharf.

It boasts some of the city's more affordable accommodation - both in hotels overlooking the tiny harbour and in nearby Chinatown.

Pyrmont is an adjoining suburb to Darling harbour that has a host of four-star hotels and a very good selection of three and two-star hotels and apartments. There are more than 50 hostels listed in the Pyrmont area.

North Sydney is situated on the area of harbourside land north of the Sydney Harbour Bridge. There are both hotels and apartments located in this area.

Wooloomooloo is a wharfside suburb just 1.5 kilometres from the Sydney CBD which has hotels, apartments, hostels, holiday homes, guest houses and bed and breakfast establishments. The five-star Ovolo complex is a luxury hotel development set up in the historic Wooloomooloo Wharf.

There is a walking track that starts at the wharf and winds its way around to one of Sydney's most glorious scenic attractions - Mrs Macarthur's Chair.

Potts Point is three kilometres east of the Sydney CBD en route to Kings Cross, a commercial area historically known for its bars, nightclubs, strip clubs and adult bookstores but which in recent times has seen some restaurant and cafe culture start to surface. More affordable three and four-star hotel accommodation can be found at this location along with apartments and hostels. Potts Point can be accessed from the CBD by either bus or train.

Manly is Sydney's best beachside location with glorious surf beaches facing the harbour and protected bay beaches in Manly Cove. Millions of Sydneysiders and tourists make their way to manly each year on the ferry to enjoy the beaches, shops, pubs and cafes. Aside from the inner-harbour attractions around the Sydney CBD, Manly is perhaps the next main tourist destination in Sydney. Its commercial area is a maze of small streets and laneways that offer up suprises. Large trees line the larger streets and make the commercial area appealing.

Bondi is famous for its surf beach and an ideal location for those seeking a beach break or holiday. The downside to staying in Bondi is that you are somewhat remote from the Sydney CBD and harbour, and its many attractions. Access to Bondi is by bus, which, unlike Manly, doesn't hold the joys of a harbour ferry ride. Also, the Bondi commercial strip doesn't have the charm of Coogee or the pictuesque appeal of Manly.

Coogee is one of Sydney's renowned surf-beach suburbs and draws a lot of tourists in the summer months. Like Bondi, it's the place to stay if you seek a beach holiday, although there is a better offering of cafes and shops in Coogee than Bondi. Coogee has the charm, Bondi has the most spectacular surf beach.