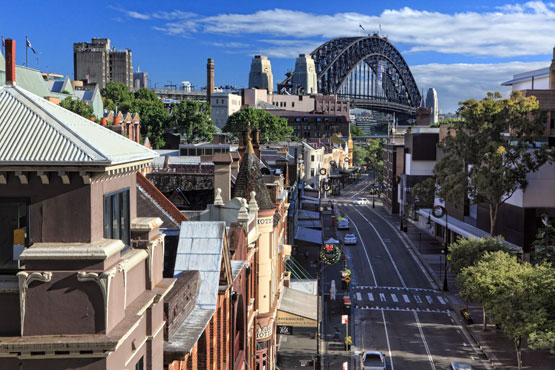 Early morning in George Street in The Rocks with the Sydney Harbour Bridge in the distance.   Picture: ©Leah-Anne Thompson/123RF.com. Panoramic picture at top of page: ©Chaiwat Leelakajonkaij/123RF.com

After the harbour, The Rocks is
the centrepiece of Sydney

The Rocks is easy to find. It's right next to Circular Quay, Sydney's main ferry terminal. Take a train to Circular Quay. At the Quay, walk west towards George Street. Turn right into George Street and you will see the Sydney Harbour Bridge in the distance. From this point on you are in The Rocks district.

Everyone who comes to Sydney loves The Rocks and it's easy to see why.

It's a portal to the very beginnings of Sydney with intriguing laneways and buildings that wind their way around a settlement area that gave rise to soldiers' barracks, hospitals, whaling warehouses, rat catchers and the Bubonic Plague.

All that is well behind in the rear view mirror that reflects the district's colourful history. Now, The Rocks is a vibrant pocket of cafes, restaurants, shops and weekend market stalls set against a backdrop of historic buildings and passageways.

This is an area that begs to be explored.

The best way to explore The Rocks is to take our free self-guided tour which provides easy-to-follow directions through the area and points out places of interest along the way.

Our small tour takes you through the laneways and passageways that make The Rocks so interesting. You can then pass through the Argyle Cut and walk to the top of Observatory Hill, where you will experience some different views of the harbour bridge and harbour.

To make the most of your walk, you should allow at least half a day, although the walk can be done in much quicker time. If you want to continue on to the steps that lead up to the pedestrian walkway on the harbour bridge, and then leisurely walk across the Harbour Bridge and return by ferry, allow a full day.

The harbour bridge part of the walk involves steep areas and steps, so if you have a mobility problem you might prefer to end your walk in The Rocks.

Nestled at the foot of the Sydney Harbour Bridge and on the western shores of Sydney Cove, The Rocks is the foundation place of Sydney and Australia, and of huge historical significance. It is often described as "Sydney's outdoors museum".

The Rocks is the oldest area of Sydney and its metamorphosis into a vibrant tourist area occurred without the destruction of the area's Old World charm and historic buildings. Sydney's town planners have put in place a sensitive conservation program that has preserved the heritage and character of The Rocks and brought about an interesting fusion of modern amenities in an old and valued setting.

Still, the area's conservation as perhaps Australia's most significant historic district wasn't always assured. In the 1960s, proposals by the Sydney Cove Redevelopment Authority to demolish this whole area were shelved following community protests supported by trade union green bans. The community and union backlash changed the direction of government thinking concerning the future of The Rocks.

Most activities in The Rocks centre around walking, looking and eating. The Rocks is Sydney's oldest preserved colonial district so the main emphasis is on the historical importance of the area. From a visitor's point of view it's a great place to immerge yourself into the surrounds. Behind the shop facades of George Street there are lanes and passageways that promise adventure. These passageways, which include Nurses Walk and Suez Canal, are a testimony to the history of an area that goes back to when the first colony was established in Sydney.

And there are secrets to be revealed. Like, for instance, Foundation Park, which is hidden away behind Argyle Terrace in Playfair Street. Hardly a park, this historic site accommodates the runis of eight tiny houses built in the 1870s.

At the top of Argyle Street is the Argyle Cut, a short tunnel blasted through sandstone that allows access from The Rocks to Millers Point. On the right is Argyle Stairs, leading to Cumberland Street and the Sydney Harbour Bridge pedestrian walkway where you can walk across the bridge.

The Sydney Visitor Centre on the corner of Argyle and Playfair Streets, (open daily 9.30am to 5.30pm, closed Good Friday and Christmas Day), is a good starting point for exploring The Rocks. This centre has a wealth of free information and brochures on points of interest, as well as souvenirs and mementos.

There is a wide range of accommodation options in The Rocks. Click here to explore those.

While wandering around the Rocks take the time out to enjoy a relaxing lunch or dinner at the numerous restaurants, pubs, hotels and cafés.

There is a diverse selection of historic pubs offering everything from a quiet drink and a meal through to live bands and DJ's. Australia's oldest pub is situated in The Rocks.

On weekends and at festival times, there is usually free entertainment, with outdoor concerts and street theatre. Many of The Rocks' pubs offer live music - jazz, folk and pop.

The Rocks Market operates every weekend, from 10:00 am to 5:00pm each day, and until 6:00pm in summer months. Some 100 stalls are set up under a series of sail-like canopies, filling the lower end of George Street . The stalls are filled with a wide range of Australian gift ideas, homewares and collectibles.

Of special interest to children is the Puppet Cottage, in Kendall Lane, while grown-ups may be more interested in taking a look at the colony's first windmill, up on Observatory Hill, or dropping in to Sydney's oldest remaining pub, the Lord Nelson, built in 1844.

Within The Rocks district the Museum of Contemporary Art, The Merchants House, Susannah Place, Discovery Museum and Cadman's Cottage (at 110 George Street), which was built in 1816 as barracks for the crew of the governor's boats and is Sydney's oldest surviving dwelling. 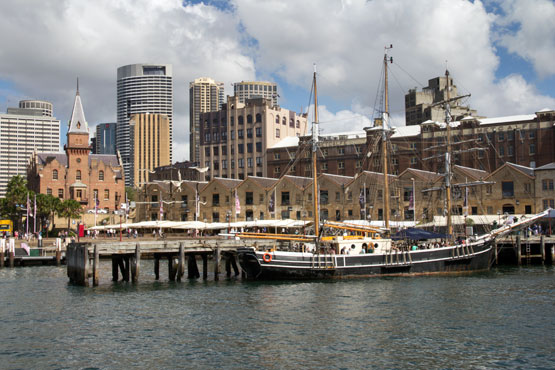 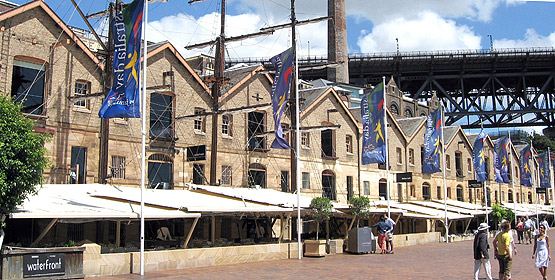 Buildings that were once warehouses in Campbell's Cove are now fashionable and hugely popular restaurants.
Picture: Greg O'Beirne, Wikimedia Commons 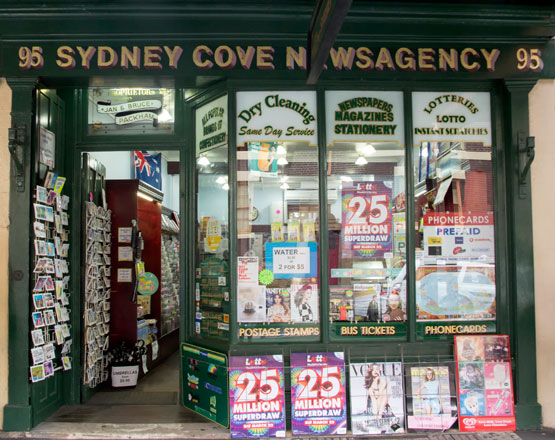 One of the the three historic shopfronts at 95 to 95 George Street. The Sydney Cove Newsagency closed as a business in 2014 due to a rent dispute with the Harbour Foreshore Authority. All three shopfronts had a narrow escape in the '60s when proposals introduced to demolish the area were shelved due to a community backlash.
Picture: ©Kevin Hellon/123RF.COM 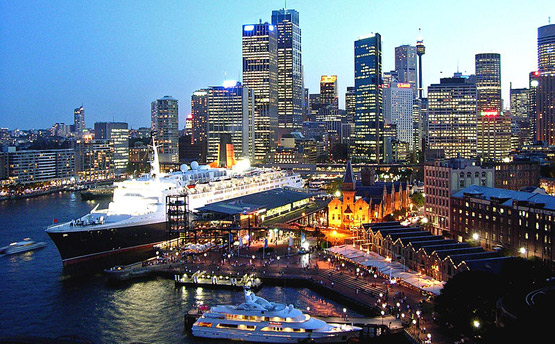 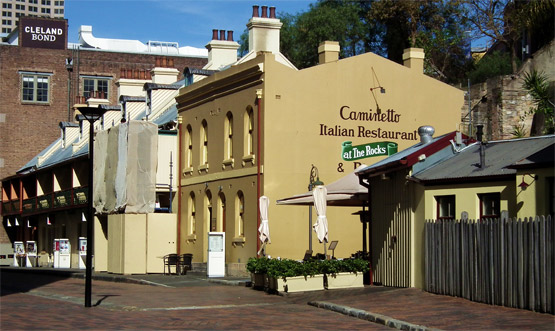 Once the haunt of pickpockets, prostitutes and sailors, Playfair Street is now a mall with fashionable shops and restaurants set up in tiny cottages and historic terrace houses.
Picture: Dudesleeper, Wikimedia Commons 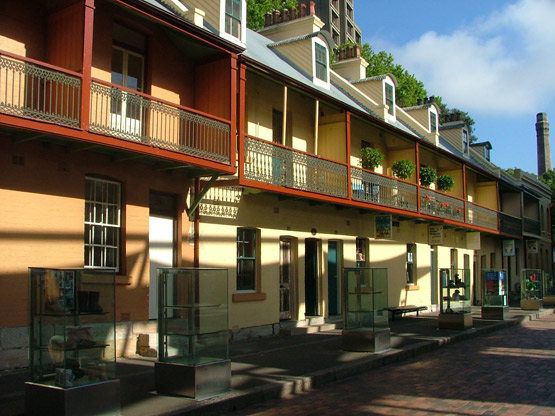 A row of terrace houses is a feature of Playfair Street, a prime tourism location in The Rocks.
Picture: Dingy, Wikimedia Commons 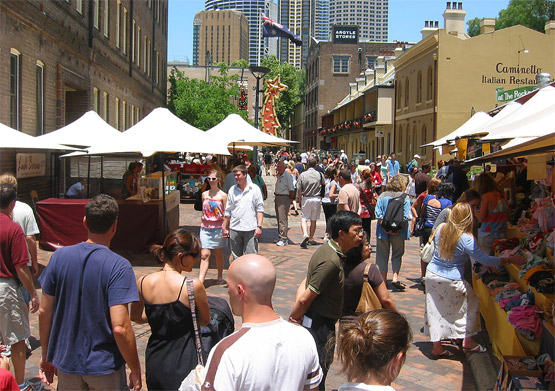