Places to stay near
the Jenolan Caves

In Oberon, about 19km from Jenolan Caves, and the next closest accommodation to the caves

On the edge of the escarpment at Katoomba with amazing views 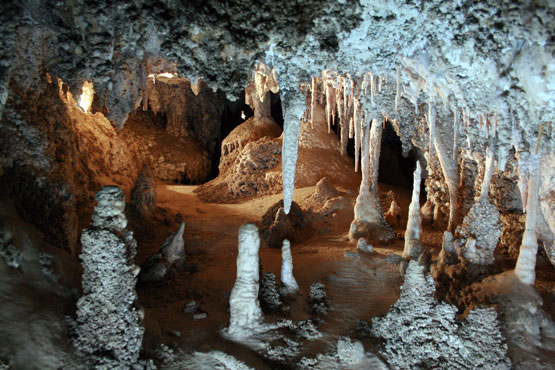 Stalactites and stalagmites take on a ghostly form in the Imperial Cave, one of the "show caves" in the Jenolan Caves complex.       Photo: Toby Hudson via Wikimedia Commons


The Jenolan Caves, situated a short drive west of the Blue Mountains, is among the world's most-famous and most-visited cave systems.

The caves are a network of ancient limestone tunnels, subterranean rivers and caverns richly draped with exotic mineral deposits. Research by the The Commonwealth Scientific and Industrial Research Organisation (CSIRO) dates the clay in the caves to be about 340 million years old, which makes them the oldest known and dated open-cave system on the planet.

Paths, walkways and lighting were first installed in the eight "show caves" and other minor caves in the late 1800s. The walkways and lighting systems have been periodically updated as a steady stream of both Australian and international visitorshave made their way to the caves over the past 150 years.

Coloured lights define and enhance the most spectacular stalactites and stalagmite formations found in the caves' chambers. Some of the chambers are vast. The Cathedral Chamber in the Lucas Cave, for instance, is so big it is used for wedding ceremonies. The acoustics in the chamber are so good that recitals are held there.

Tours of the 11 caves, through three kilometres of paths, are conducted each day (except Christmas Day), starting at 10am. Visitors pay to visit a single cave or buy passes to multiple caves. Some caves are easy to walk through while others are more physically demanding, but cave and tour options have been devised to suit all ages and levels of fitness. Tours stop running by 5pm.

The Jenolan Caves are 175 km west of Sydney and 30km west of Katoomba and are part of the UNESCO World Heritage–listed Greater Blue Mountains Area. Trips to the caves by commercial tour operators are run from both Sydney and Katoomba.

To reach the Jenolan Caves by car, visitors travel along a small road that winds through picturesque bushland until arriving at the Grand Arch, an archwayand tunnel cut into a huge rock formation. Six of the cave tours leave from points within the Grand Arch tunnel.

The 80-metre-long tunnel opens into a chamber surrounded by steep bushland and rock formations known as the Devil's Coach House.

Here there is a tiny village of sorts with the main man-made feature being Jenolan Caves House, a huge, four-storey hotel complex built in 1896 which was designed in the English Domestic Revival style popular in London near the turn of the century. The impressive structure is also regarded as being in the Federation Arts and Crafts style. Caves House still functions today as a large guest house providing tourist accommodation. The dining room in Caves House is as big as some of the caves' larger chambers.

The caves that comprise the Jenolan Caves cave complex are:

The Lucas
The Lucas Cave, opened in 1860, contains the Cathedral Chamber, which is more than 50 metres (160 ft) high, and the Exhibition Chamber, which hosts the Broken Column formation. The Lucas is so big that it can accommodate tours of 65 people at any one time.

The Chifley
The Chifley Cave was the first cave in the world to be lit by electric light when it was opened in 1880. Historic coloured lights can still be seen in two of the cave's chambers.

The Jubilee
The Jubilee, opened in 1803, is the longest of the show caves. Tours to this cave run for much longer than others partly due to the length of the cave system and partly because it is further away from the other caves.

Ribbon Cave
The Ribbon Cave, opened in 1904, is resplendent with "ribbon" helectites.

River Cave
The River cave was opened in 1903 and contains some spectacular formations, including the Minaret, Grand Column, Queen's Canopy and River Styx. In the early part of the 19th century, visitors had to climb into a small boat to cross the river. A concrete bridge now stands in that spot. The River Cave tour is the most demanding of the cave tours.

Temple of Baal Cave
The Temple of Baal, opened in 1904, derives its name from the biblcal story of Baal as well as other mythology. One of its attractions is a nin-metre shawl formation known as the Angel's Wing.

Nettle Cave
One of the first caves opened to the public, in 1838, the Nettle Cave is known for its "crayfish backs" formations shaped by light and wind, which are thought to be more than 20,000 years old.

ABOUT THE JENOLAN CAVES

The caves were created millions of years ago through a complex relationship between water, rock, atmosphere and the lifeforms that inhabit the environment.

Since their discovery by European settlers in the 1830s, more than 40kms of multi-level passageways have been explored and mapped. 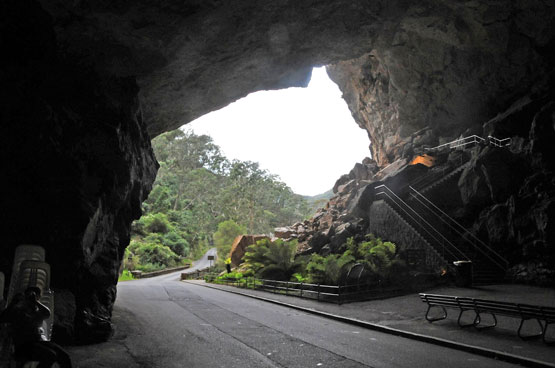 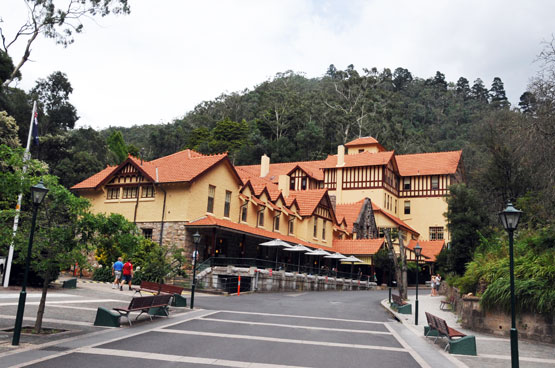 Inside the Grand Arch is Caves House, a grand hotel built in 1896.
Photo: Jerrye & Roy Klotz via Wikimedia Commons 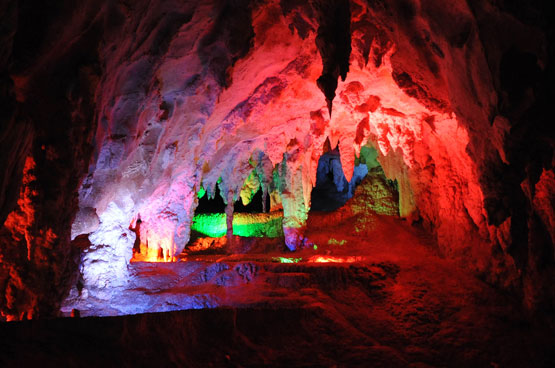 The Chifley Cave was the world's first cave to be lit by electric light when it was opened in 1880.       Photo: Jerrye & Roy Klotz via Wikimedia Commons 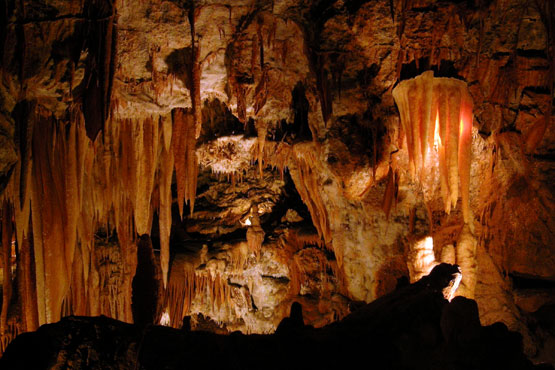 Stragecially placed lighting is effective in revealing the shape, size and features of the caves' many stalactities.       Photo: Wikimedia Commons 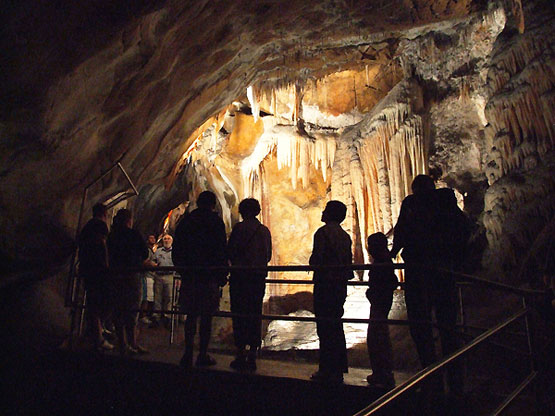 A tour leader takes a group through the Chifley Cave.       Photo: CarolynMelbourne via Wikimedia Commons 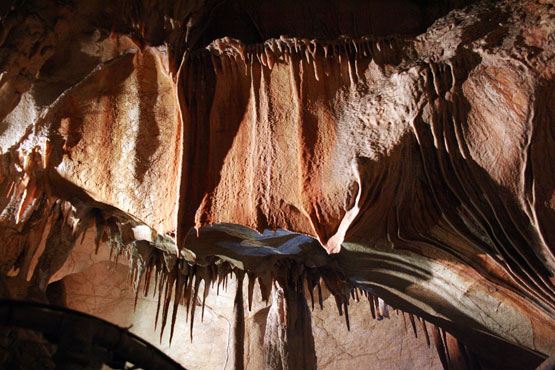 The rustic colours of limestone formations are strikingly evident in this picture taken in the Imperial Cave.       Photo: Toby Hudson via Wikimedia Commons 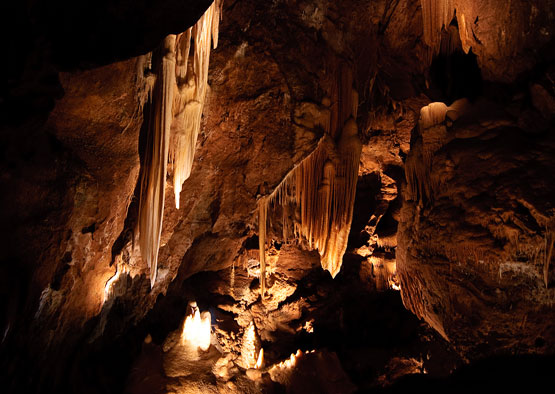 The Temple of Baal cave has a stand-out feature called the "Angel's Wing".       Photo: Marshal Hedin via Wikimedia Commons 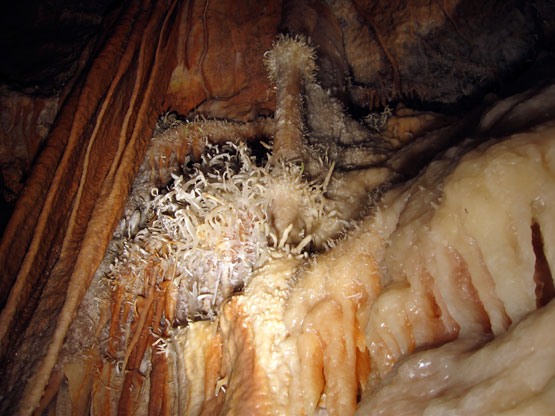 Above: The delicate features of helictites stand out from other limestone formations. Below: The wiry form of the helictite is exaggerated by coloured lights.        Above photo: Jason Ruck via Wikimedia Commons. Photo below: Wikimedia Commons

Blue Mountains and Jenolan Caves Day Trip from Sydney Including Optional Caving Adventure, from Sydney, 11 hours, from $A161

Blue Mountains and Jenolan Caves Motorcoach Day Tour, from Sydney, 10 hours, from $A169

Small-Group Blue Mountains and Jenolan Caves Day Trip, from Sydney, 11 hours,
from $A130