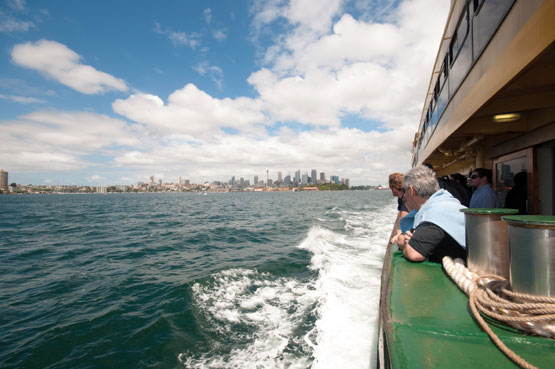 A Sydney ferry leaves the CBD behind as it makes its way to Manly. Photo: Jongjet Klieanthong


Why Sydney Harbour stands out
as the world's No.1 tourism destination

By Rod Ashcroft,
Owner of Sydney.com.au


In travelling extensively throughout the world over the past three decades I have yet to encounter a harbour equal to that of Sydney.

The grandeur of the harbour lies in many things: the splendour of the blue waterways under constant blue skies; its network of inlets and smaller habours providing sanctuary to thousands of moored yachts; the brightly coloured rocky shorelines, which in some settings are like great sculptures; it's small coves and sandy beaches; and the remarkable expanse of green reserves that have defied real estate developers and been conserved as part of the Sydney Harbour National Park.

Even the flamboyant - and in some instances ostentatious - waterfront homes can appear at times to look in place on the harbour shores.

I can remember being taken to Sydney by my father as a child, and each time going out on the ferries. Most times it was on the Manly ferry. At Circular Quay, there was the thrill of men dragging the boarding ramps away from the ferries and casting off the big ropes.

Fort Denison is a small island north-east of the Royal Botanic Gardens, which we would pass on our way to Manly. I always wondered about this insignificant little rock and it wasn't until I was much older that I learned it was a penal site in the late 1770s. It wasn't until 1885 that the prison structure was knocked down and the island fortified with cannons to became a vital part of the colony's defences. It now it serves as a major tourist attraction and the site of a fashionable restaurant.

The Sydney Opera House, now the most prominent feature of Sydney Harbour, had not been thought of at the time my father took me out on the ferries. It would be built later, enhancing the world's most beautiful waterway with an equally beautiful man-made creation.

Not all that far away from Fort Denision - in startling contrast to this small rock with its dark history - is Point Piper, the most exclusive suburb in Sydney and the location of harbourside properties worth tens of millions of dollars. One of the most expensive and admired Point Piper properties - thought to be worth more than $50 million - is owned by Australia's current Prime Minister, Malcolm Turnbull, and his wife Lucy, a former Lord Mayor of Sydney.

I can recall as a worker in my early 20s sitting on the roof of a Point Piper mansion installing air-conditioning, all the time looking out on the harbour and thinking the view must be the best of anywhere on earth.

A little further on, still on the southern side of the harbour, Rushcutters Bay appears with its flotilla of moored yachts. Too many yachts to count.

On the norther side of the harbour is Taronga Zoo. Some ferries stop at the zoo, others skim by. Taronga Zoo is carved into the rocky shores and forested areas of Bradleys Head, Mosman. It is unique in the world as a zoological garden because of its exclusive harbourside position. Where else do giraffes look out out on such wondrous sights?

At times my father would take me to the zoo, but more often than not we simply took ferries to different destinations. Regardless of whether we stopped or just passed by, the zoo always excited my imagination.

I cherished the experience of the ferries edging closer to Sydney Heads, the entrance to the harbour, passing Rose Bay and its flying boat terminal. At times we were lucky enough to see the flying boat take off or land. The aircraft was a main feature of the harbour from the 1920s to the 1970s. Sadly, in 1974, the Rose Bay terminal closed and at the time of closure it was the last major flying boat terminal in the world.

A little further on and Watsons Bay was now prominent on the southern shores. Its famous small beach, Camp Cove, which was renowned for nude bathing, always looked inviting.

Nearing the entrance to the harbour, the ferry issuddenly in rougher water and appears to be heading for the centre of the heads and out into the ocean. The boat would heave itself up out of the water and then crash down heavily. Just as we thought we were about to forge through the heads, the ferry would turn abruptly and head for a small harbour on the northern side. From there it made its way to Manly Cove, where everyone disembarked and walked through the shopping strip known as The Corso to the surf beach.

At the time, being so young and so small, I could not understand why I was so overwhelmed by the harbour, but I thrilled in being on the water riding the ferries and watching wondrous sights slip by. In the years that followed I came to realise it was an intoxicating mix of many things that drew me in: the sparkling blue water, perfect weather and warm sun (even in winter), the endless blue sky, the ferries rising and falling as they pressed on through the waves, laughter and excitement of families onboard, yachts in full sail skimming past, picturesque waterfront homes on the southern side of the harbour and the dense, foreboding forested areas on the northern shores.

Later, as a young man, whenever I visited Sydney the harbour was like a magnet to me. I found it impossible to spend time in Sydney and not venture out onto the harbour. To me, Sydney has always been about the harbour; it is the harbour.

In those early times the Manly ferry was my mainstay in seeking solace on the water. I embarked at Circular Quay, got off at Manly, and then returned to the quay late in the afternoon. A pleasant outing - both on the harbour and at Manly beach.

But as I grew older I stopped taking the ferry rides. Instead, I went out on the cruise boats because they offered a different experience. The cruise boats ventured where the ferries did not. Rather than take the shortest possible route to a pre-determined destination they were free to go wherever the captain decreed.

They would hug the shoreline and follow inlets, and grant eyestruck passengers vistas of the harbour not normally seen, close-up encounters with coves and small sandy beaches that you never get to see on the ferries.

The cruise boat operators were well aware of the many natural attractions the harbour offered and sought them out for the delight of their passengers.

Later, as cruise boats became more sophisticated, they began to offer the ultimate form of relaxation - lunch and dinner cruises on the harbour. Cruises that went on for glorious hours and stirred the senses with an intoxicating mix of harbour views and fine food and wine. The ultimate form of relaxation and an experience guaranteed to make any holiday in Sydney a memorable one.

Initially, lunch and dinner were little more than buffet offerings. But as the virtues of lunch and dinner cruises became more widely known and enjoyed, and the number of cruise operators multiplied, their offerings became more sophisticated. Suddenly, you could book a table on a cruise boat and even opt for a guaranteed window table. You could sit at your table on one of the many decks or else you could pay more and experience the scenic pleasures of the top deck.

The dining experience became more profound, with a choice of sunset, twilight or evening sittings. The ultimate dining experience on the harbour was a degustation dinner - six-course meals with different wines accompanying each course.

And, for those in a hurry or on a budget, there are cruise boats that offer a more simple outing on the harbour - minus the lunch or dinner experience. For many people that will be a more than satisfactory way of experiencing the delights of Sydney harbour. That's the beauty of the harbour cruises: there is something to accommodate every person's pocket and taste.

One enterprising business capitalised on the "hop on, hop off" bus sensation and created a cruise boat variation, so passengers can get on and off the boats at different points around the harbour.

Whichever way you choose to see Sydney Harbour, whether it be by humble ferry or by cruise boat, you will be embarking on one of the most pleasurable and memorable experiences of a lifetime. As an Australian living in this country I feel blessed that I can spend time on Sydney Harbour whenever I wish. In fact, I couldn't imagine being in Sydney and not being out on the harbour.

I hope you enjoy the experience :-) 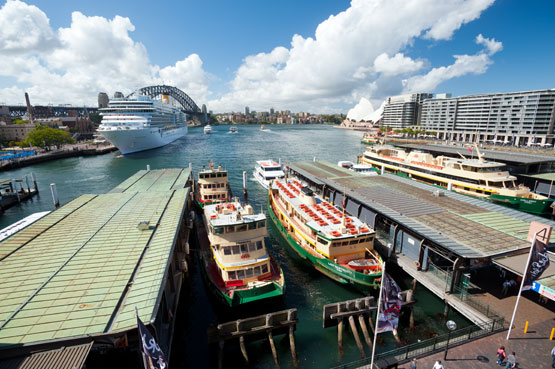 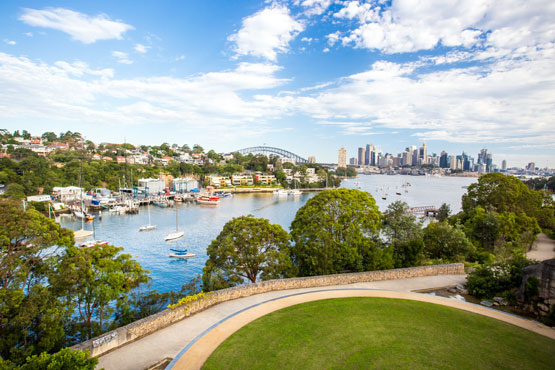 Sydney Harbour and city skyline from the Waverton Peninsula Reserve 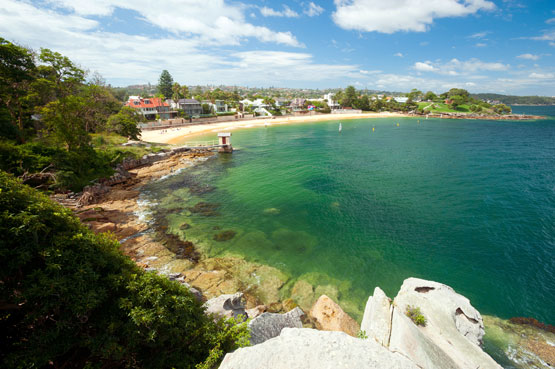 Camp Cove beach at Watsons Bay, on the southern shores of Sydney Harbour. 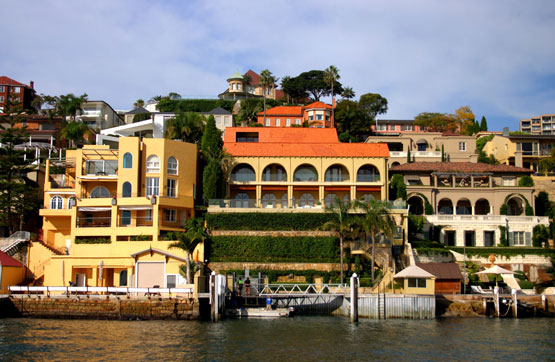 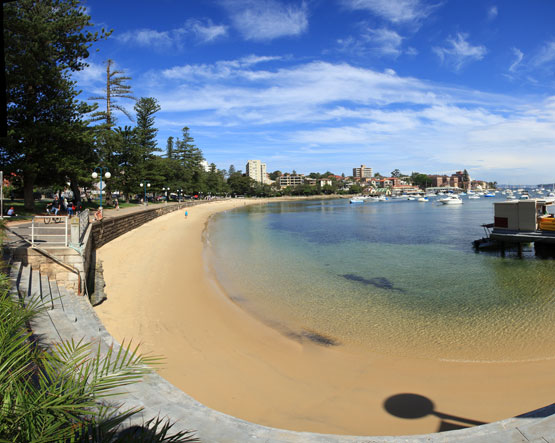 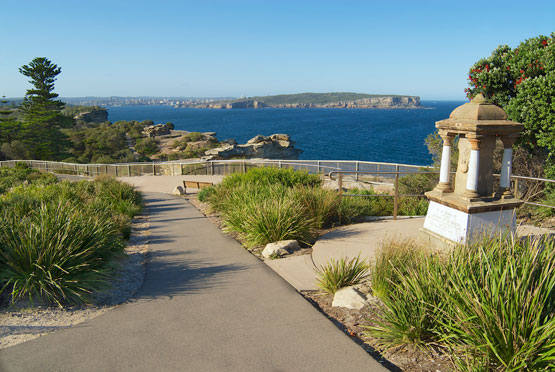 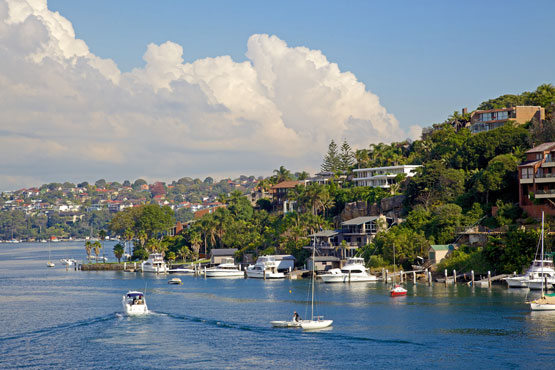 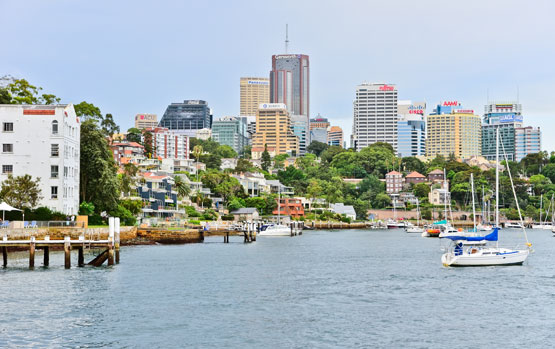 The popular location of Lavender Bay, adjacent to the Sydney Harbour Bridge on the northern side of the harbour.
Picture: ©Lin Chu-Wen/123RF.COM 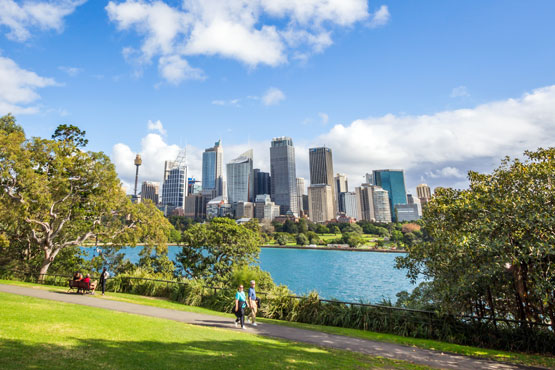 Hop on, hop off