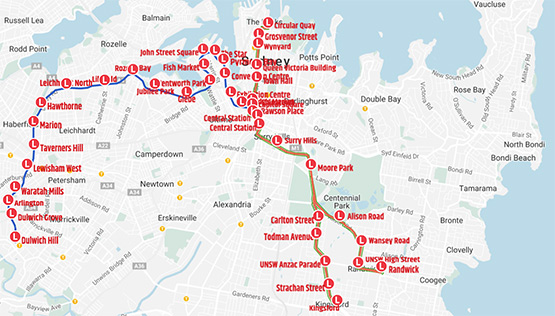 The existing Central Station to Dulwich Hill routes is shown in blue. The proposed route from Circular Quay to Kensington and Randwick is marked in red. Click image for larger map.

Sydney got rid of its extensive tram network in the 1950s and replaced them with bus services. Now, trams are returning to the city with the introduction of one ligh trail service and the building of a second.

The existing service running between Central Station and Dulwich Hill is handy for visitors because it runs through the CBD and stops at Paddy's Market and Chinatown, Darling Harbour and Star City casino.

A South East Light Rail project (CSELR) now being built will see trams run from Circular Quay along George Street to Central Station, through Surry Hills to Moore Park, then to Kensington and Kingsford via Anzac Parade and Randwick via Alison Road and High Street. 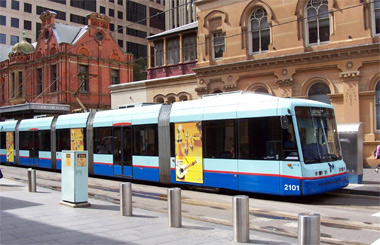 The Service between Central and Star City runs:

The Service between Central and Lilyfield runs:

Fare vary depending on whether you are travelling within Zone One or Zone Two or across both Zones. A full range of tickets and the fare structure may be found here.

A new lightrail service is proposed for the Eastern Suburbs