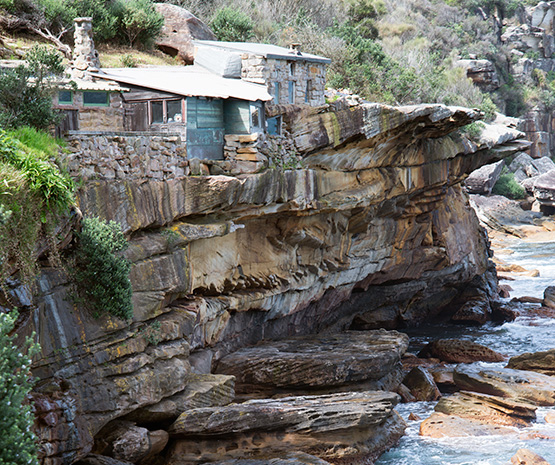 How to get to Crater Cove Walking Track


On the northern foreshores of Sydney Harbour, in a tiny windswept cove in Middle Harbour, sits seven ramshackle huts built during the period 1923 to 1963.

The huts nestle on the rocky cliffs and foreshores of Craters Cove, which looks out on Middle Head and outer Sydney Harbour. There are views from Crater Cove of South and North Heads and the open sea.

Most of the huts at Craters Cove are built mostly from stone and sit precarilously perched like a row of detached terraces on the steep, rocky cliffs of Dobroyd Head, the clifftop rocks serving as rustic stone floors. The remaining (wooden) huts are scattered around the clearing that adjoins the cove.

The huts were built at different times. The first lot were built by fishermen in the 1920s who used them for short stayovers while fishing at Craters Cove. In the 1930s they were thought to be permently occupied due to the hardships of the Great Depression. At Crater Cove it was possible escape the harsh economic times by building makeshift dwellings, fishing and growing your own food in carved out vegetable gardens.

Others seeking solitude came to Crater Cove in the 1960s and other huts were built.

In the 1970s and 1980s people permanently lived in the huts enjoying what some would describe as an idyllic lifestyle in a setting that boasted million-dollar views - much to the disgust of the many landowners outside the national park who had paid millions of dollars for their harbour view properties.

This situation occurred until 1984, when occupants were forced out by the National Parks & Wildlife Services (NPWS). The evictions followed the NSW Government's declaration of the new Sydney Harbour National Park, which incorporated Dobyoyd Head and Craters Cove. Some of those evicted took their case to the High Court of Australia, claiming there had been permanent occupation of the huts since the 1970s and recreational use since the 1930s. They further backed their claims in arguing that, by living there, they were acting as custodians and carers for the huts and the cove. The High Court decided in favour of the government and the evictions upheld.

The huts have been boarded up since the '80s and a team of volunteer "guardians" now work with the NPWS to watch over the huts and maintain the surrounding area. The huts remain a "secret" of Sydney's history and relatively few Sydneysiders have visited or seen the huts. Many do not even know of their existence. Occasionaly, articles appear in newspaper articles with pictures of the huts.

The lack of awareness of the huts' existence is not so much because they are situated in a remote location within a national park, but rather because they are neither promoted nor publicised by the NPWS. The path leading to the huts, Crater Cove Walking Track, is deliberately not signposted. People, generally, are not encouraged to go there.

NPWS officials have been quoted in the press as saying they don't publicise the huts because of their poor condition. They see the huts and their surrounds as fragile and in need of protection and conservation, which is perhaps why the track into the cove is not signposted. The prospect of thousands of tourists flocking to the cove in summer months could damage the huts and destroy the ecologically fragile surrounds of Craters Cove, one NPWS spokesman is reported to have said.

One critic of the NPWS and its volunteer caretakers, Russ Grayson, a Sydney journalist, is critical of the secrecy surrounding the huts; in particular, the actions by some "caretakers" in not making people welcome. Grayson firmly believes that national parks should be open to the public, yet here he says he encountered people not employed by the NPWS "who would rather keep the existence of the old settlement — what some people regard as a heritage site — a secret and a place that they, but as few others as possible, get to enjoy."

Grayson first visited the huts in the 1980s as an assigment for a radio current-affairs program to interview some of the occupants facing eviction. One of those he interviewed was Simon Flynn, a man in his early '30s who had lived in one of the huts for 18 years. Grayson later learned that Flynn had never got over being forced out of his Crater Cove hut. According to Flynn's sister, in a post on Grayson's website, her brother died in the '90s "... in a rural enclave in Tasmania ... sadly the past trials and tribulations [of being evicted from Crater Cove] ... had a big effect on his health." Grayson's account of his visit to Crater Cove and his meeting with Flynn makes poignant reading.

Although the NPWS does not stop people walking to Craters Cove, it does not encourage visitations. The absence of walkers on the track, and at the cove, made this abundantly clear at the time sydney.com.au visited the huts. The only people encountered during our three-hour excursion was a pair of English backpackers. To get there, they would have first had to know about the huts, then research how to get to them.

For most visitors, even finding the start of the Craters Cove Walking Track is a challenge in itself. The track, which is not signposted, is accessed via a barely noticeable, overgrown clearing that juts off the Doboyd Head Track. Most visitors walking to the Dobroyd Head Lookout don't even realise there is a path there.

For those who seek out the walking track and follow it to Crater Cover, there is the satisfaction of entering a portal that provides a glimpse of a unique chapter of Sydney's history. The short walk also promises stunning views of the cliff-top huts and cove.

How to get to Crater Cove Walking Track 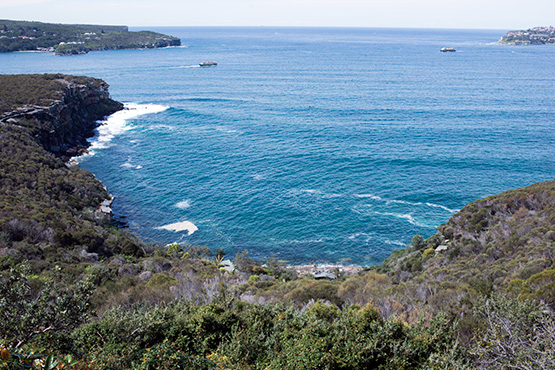 A first glimpse of Crater Cove, looking down from Dobroyd Scenic Drive. Timber huts can seen on the cove's foreshores. The stone huts on the eastern side of the cove are not visible from this point.
Picture: © Sydney.com.au 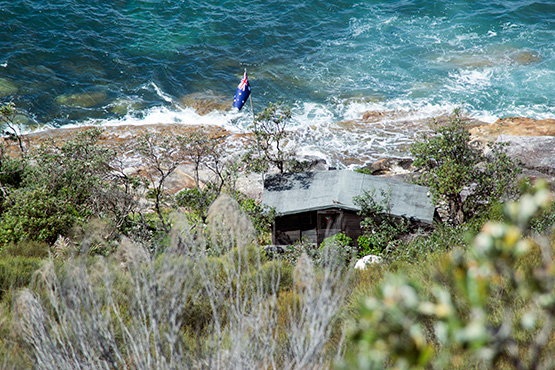 Zooming in on the same picture reveals details of one of the huts with an Australian flag raised on a flagpole.   Picture: © Sydney.com.au 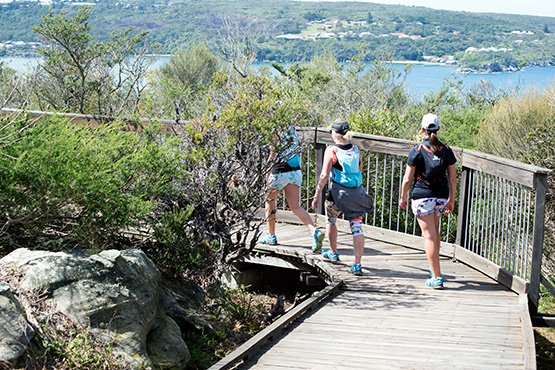 Visitors hurry along the 12-kilometre walking path from The Spit to Manly not realising there is an enticing slice of Sydney's history a short walking distance below. Picture: © Sydney.com.au 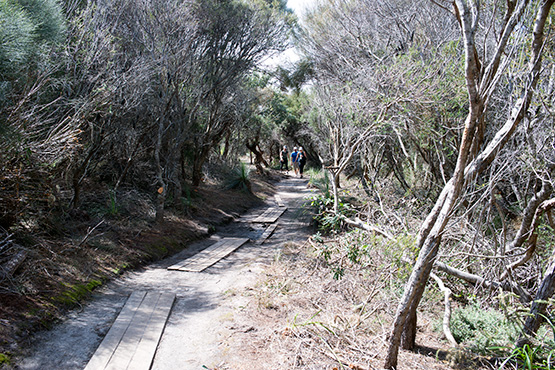 On the way to Dobroyd Head Lookut. At first the walking path is more of a track, with planks set in the ground to stop the track being eroded away.   Picture: © Sydney.com.au 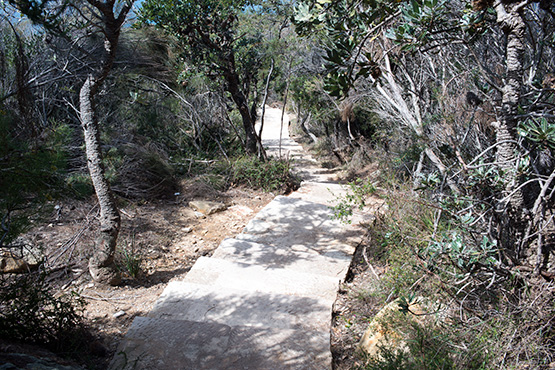 The path gets better the closer you are to Dobroyd Head Lookout with stone steps in steeper parts. Picture: © Sydney.com.au

The Manly ferry departs Manly Cove on its way to Circular Quay. The Norfolk pine trees that line Manly Beach can be seen in the distance, to the left.   Picture: © Sydney.com.au 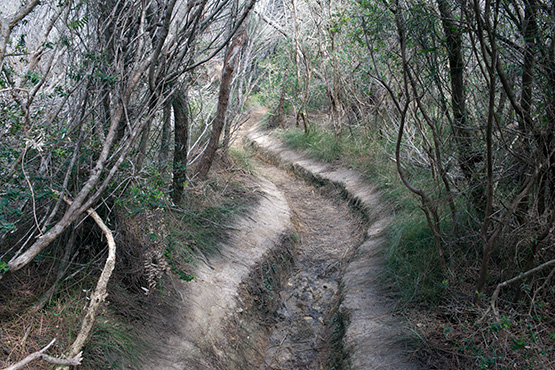 Leaving the lookout path, visitors find themselves on the Crater Cove Walking Track, which is more of an adventure trail. Picture: © Sydney.com.au 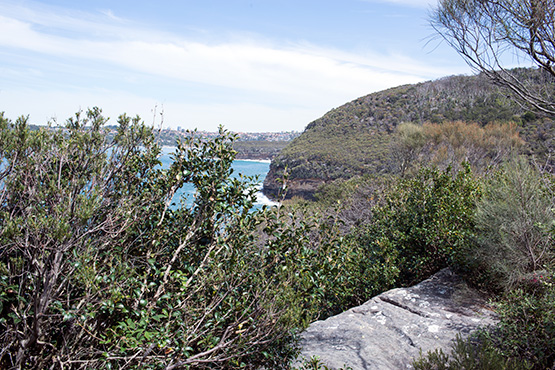 A glimpse of the rocky foreshore on the far side of Craters Cove soon becomes visible.   Picture: © Sydney.com.au 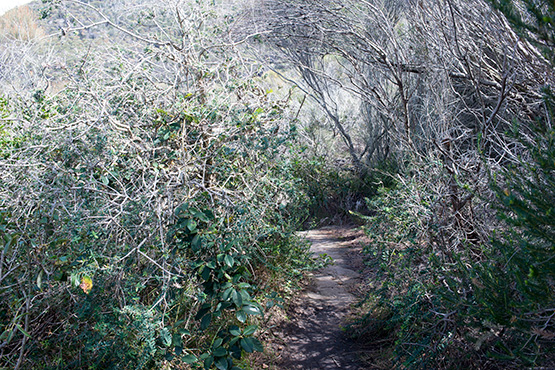 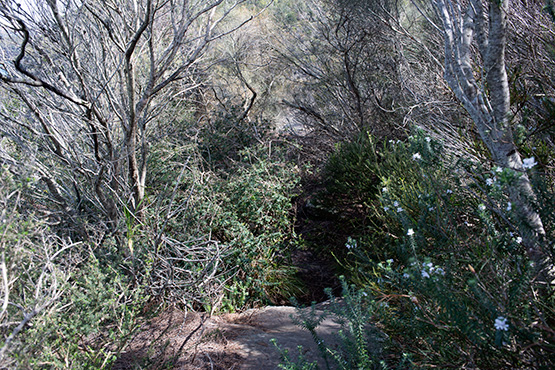 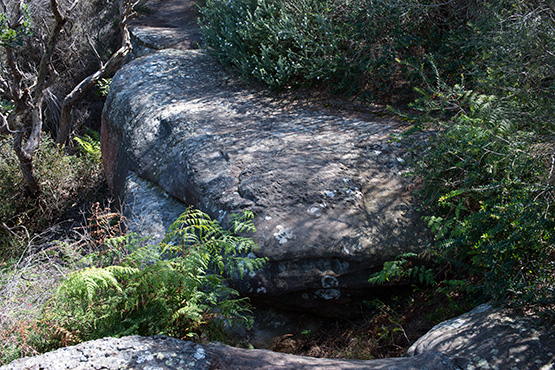 This rock ledge is part of the walking path. Picture: © Sydney.com.au 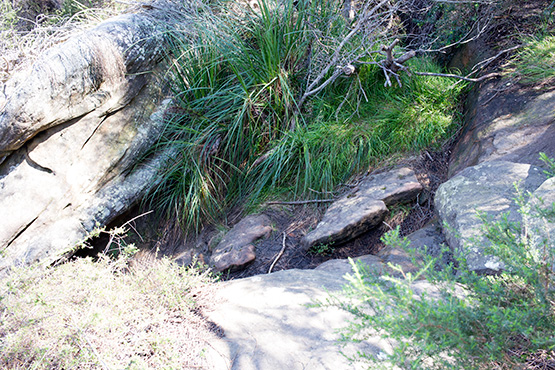 The most difficult section of the walk where you are clambering down rocks.   Picture: © Sydney.com.au 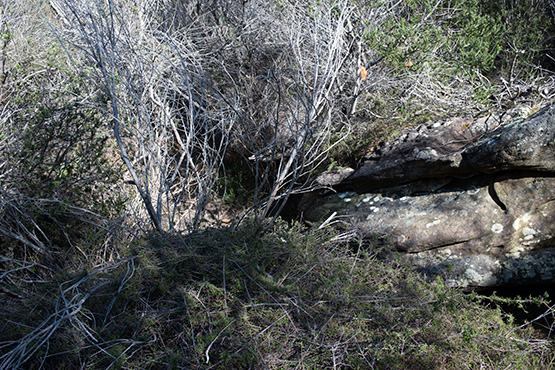 The path is now overgown to the point where you are clawing your way through the brush.   Picture: © Sydney.com.au 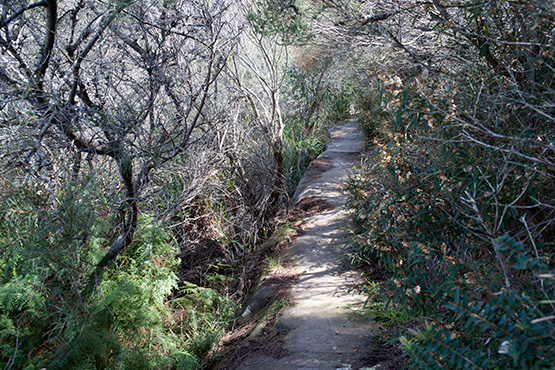 Some relief in the form of another rock ledge.   Picture: © Sydney.com.au 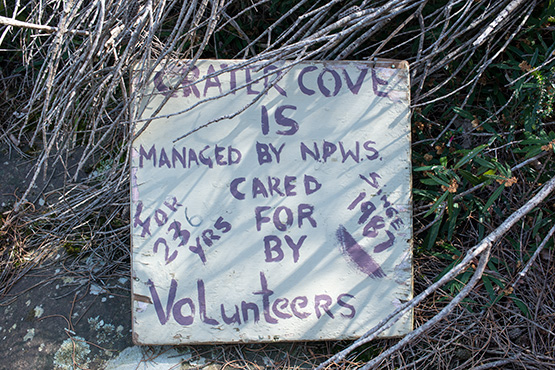 Suddenly a sign appears, signally you are nearing the cove and the huts.   Picture: © Sydney.com.au 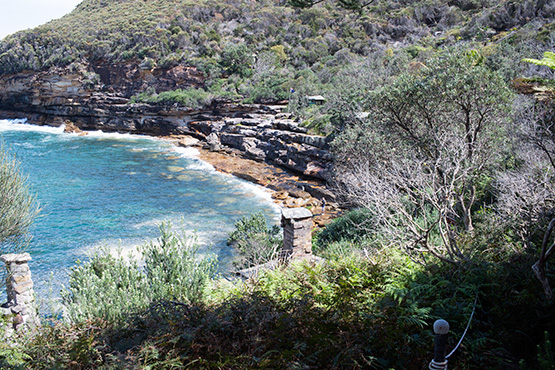 At last, the roofs of the first group of huts can be seen with Craters Cove immediately below.  These huts are built on the rocky cliffs. Picture: © Sydney.com.au 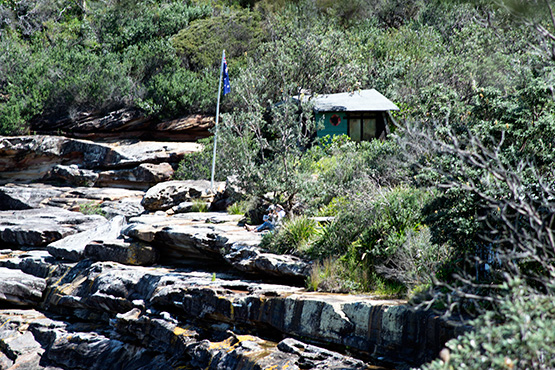 A shot from a telephoto lens reveals English backpackers sitting on rocks in the centre of Craters Cove.   Picture: © Sydney.com.au 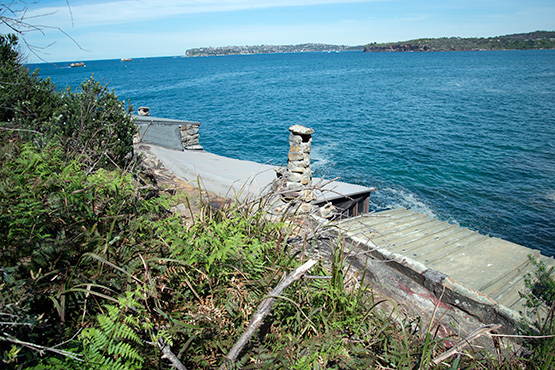 The path leads beside the roofs of the stone huts on the eastern side of the cove.  South Head can be seen in the distance. Picture: © Sydney.com.au 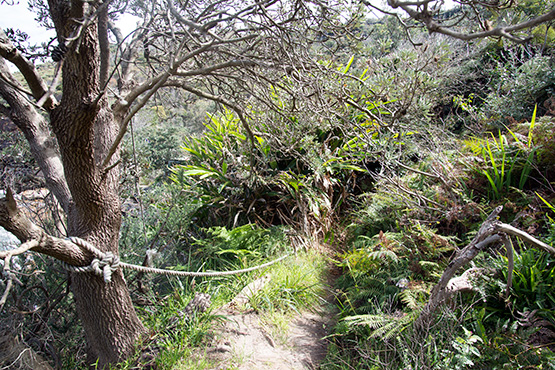 The walking path continues down to the cove to the other huts.   Picture: © Sydney.com.au

Next: see the huts at Crater Cove