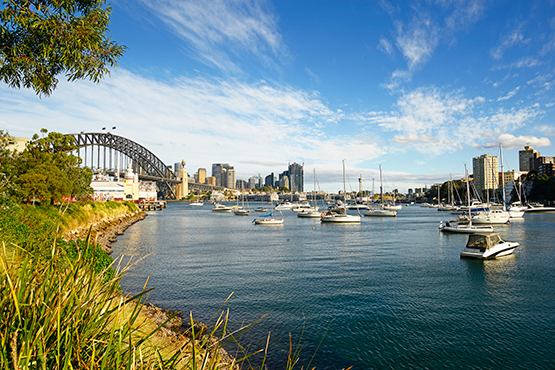 A Urban Living Index report released in July 2016 lists Lavender Bay as the most liveable part of Sydney. It is certainly one of the most picturesque.    Picture: © Sydney.com.au    More pictures below


Blue hues of Lavender Bay
are a sight to behold

This is one of the shortest walks in Sydney but also one of the most beautiful and picturesque. The ultimate reward for those who do the walk is that you get to spend some time lazing about at Lavender Bay, where the blue hues of the water against the backdrop of the blue sky make this a magical place to be.

The walk starts at the Jeffrey Street, Kirribilli ferry station, which is a little more than five minutes by ferry from Circular Quay. It follows the foreshore of the harbour around Olympic Drive under the Sydney Harbour Bridge - with facing views of the Sydney Opera House, Circular Quay and Dawes Point - to Luna Park and then on to Lavender Bay.

You will notice a plaque in Olympic Drive (GPS co-ordinates Lat: -33.849688
Long: 151.213092) that refers to the convict transport ship, the Surry. The plaque commemorates the arrival of the Surry at Sydney in July 1814 after an outbreak of typhus. The epidemic had killed 36 convicts, together with the surgeon, First and Second Mates, boatswain, two seamen and four of the guard. Thomas Raine, who had been the Third Mate, brought the Surry into Port Jackson. Afterwards, he became Captain of the Surry and settled in Sydney

The foreshore path sweeps around the two 89-metre (292-foot) concrete pylons that support the bridge arch on the northern side of the harbour. The land formation here is called Milson Point and is named after James Milson, one of the first colonists granted land on the North Shore. He supplied the colony with produce from a farm on this site.

The bridge's giant pylons are faced with 18,000 cubic metres (635,664 cubic feet) of granite that was quarried at Moruya on the NSW south coast. More than 200 Australian, Scottish, and Italian stonemasons and their families were housed at a temporary settlement at Moruya, where they quarried, cut, dressed and numbered the blocks, which were then transported to Sydney on three specially-built ships.

Huge steel abutments are prominent at the base of the pylons. These are essential to support the loads from the arch and hold its span firmly in place. Oddly enough, the actual pylons have no structural purpose but were included to provide a frame for the arch panels. Stranger still, the pylons were not part of the original design - they were added later to allay public fears about the bridge's structural integrity.

Set into the sea wall on Olympic Drive at Milsons Point, directly under the bridge, is the bow section of the Royal Australian Navy light cruiser HMAS Sydney. The bow's placement is a war memorial to the sinking on 9th November, 1914 of the German raider "Emden" by HMAS Sydney. The ship's mast also serves as a memorial on Bradley's Head.

Walking on you pass the North Sydney Olympic Pool, an Art Deco-styled Olympic-sized outdoor pool built on part of the Dorman Long workshops site following the completion of the Harbour Bridge. The pool opened in 1936 and hosted swimming and diving events for the 1938 Empire Games.

Opposite the pool is the Milson Point ferry station, which is where families alight for Luna Park, Sydney's famous amusement park.

The walking path continues on the boardwalk alongside Luna Park until it evolves into a bitumen path. This path, flanked by high native grasses, skirts around the foreshores of Lavender Bay in an area designated as Lavender Bay Parklands . This is a peaceful setting even though there is a backdrop of grotesque high-rise office towers and residential developments.

Staggered among the vegetation on the sides of the walking path are small art works by Arthur 'Art' Barton, the "Rembrandt of Luna Park".

But the main attraction is undoubtedly the bay and the scenery here is breathtaking with vistas of small yachts moored in blue waters under brilliant blue skies. Lavender Bay was named after a colorful character of the times, but it could easily have been name after the collusion occuring between the sky and the water.

From deep in Lavender Bay you can look back and see how the Sydney Harbour Bridge links Luna Park on the northern side to Dawes Point and Walsh Bay on the southern side, with the luxury Pier One Hotel almost jutting up to the bridge.

The foreshore walk mostly ends at the Lavender Bay wharf where there is a long jetty reaching out into the bay. There are seats on the jetty and it's a wonderful place to sit and gaze at the bay and the bridge and the harbour. The views from here are some of the most picturesque in Sydney.

There is one more surprise in store at Lavender Bay. At the back of the walking path is a tunnel set into a brick wall. Look through the tunnel and you will see to a set of steep stone stairs. These stairs take you up to Wendy's Secret Garden, a wonderful public garden carved into disused railway land by Wendy Whitely, the wife of the late Brett Whitely, one of Australia's best-known artists.

Ms Whitely, an artist in her own right, has had a lot of helpers along the way, and they have created a majestic shade-garden sanctuary for the people of Sydney; somewhere where you can walk and explore or else just sit and laze away the time. Don't miss seeing this delightful garden! 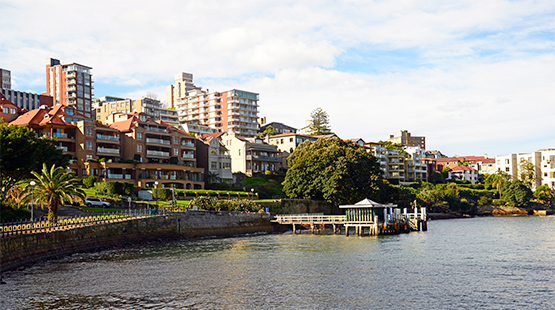 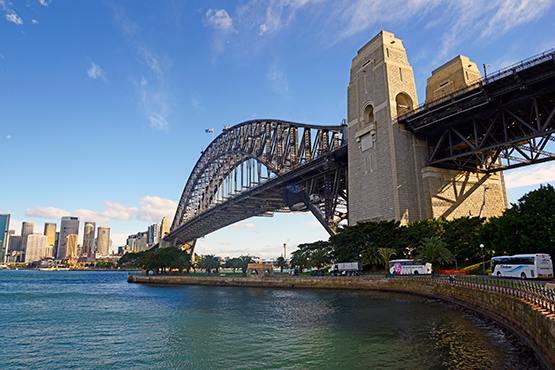 The walking path follows the foreshore around under the Sydney Harbour Bridge.   Picture: © Sydney.com.au 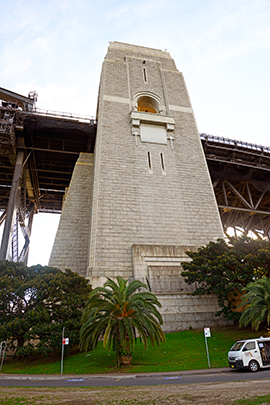 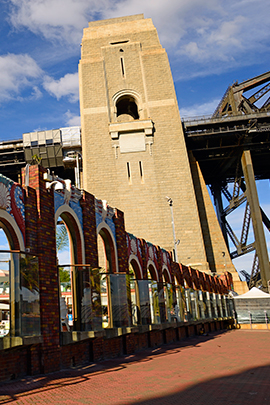 The two giant granite-faced concrete pylons that support the Sydney Harbour Bridge on the northern side of the harbour.   Pictures: © Sydney.com.au 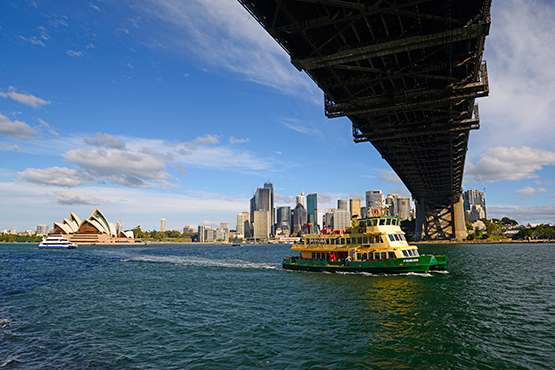 A ferry on its way to Milson Point passes under the Sydney Harbour Bridge, with Dawes Point, Sydney Opera House and the CBD in the background.    Picture: © Sydney.com.au 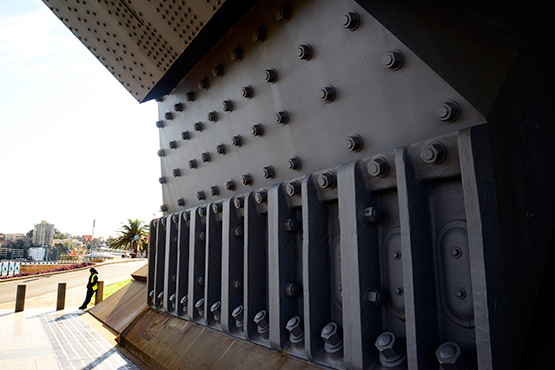 One of the huge steel abutments at the base of the pylons, which are essential to support the loads from the arch and hold its span firmly in place.  Picture: © Sydney.com.au 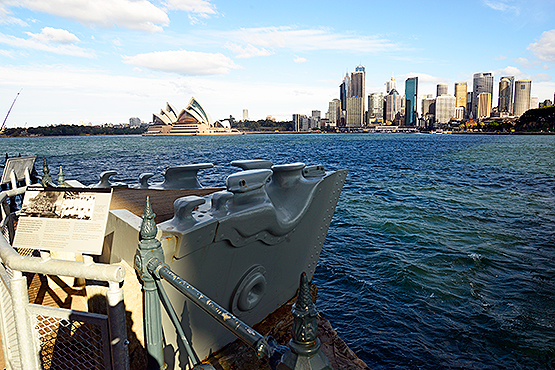 The bow section of the HMAS Sydney is set into the sea wall at Milsons Point.   Picture: © Sydney.com.au 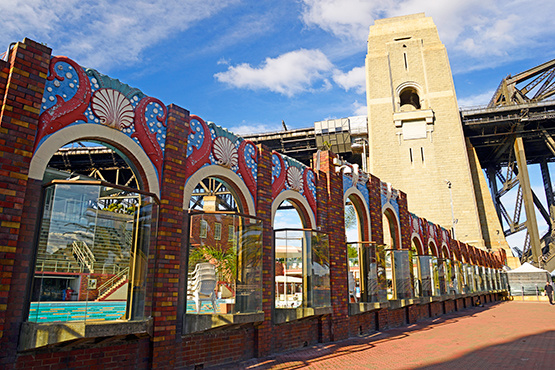 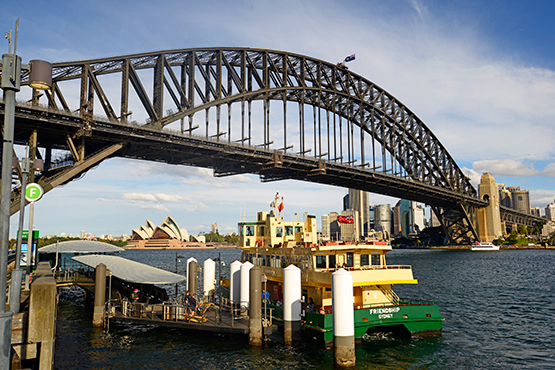 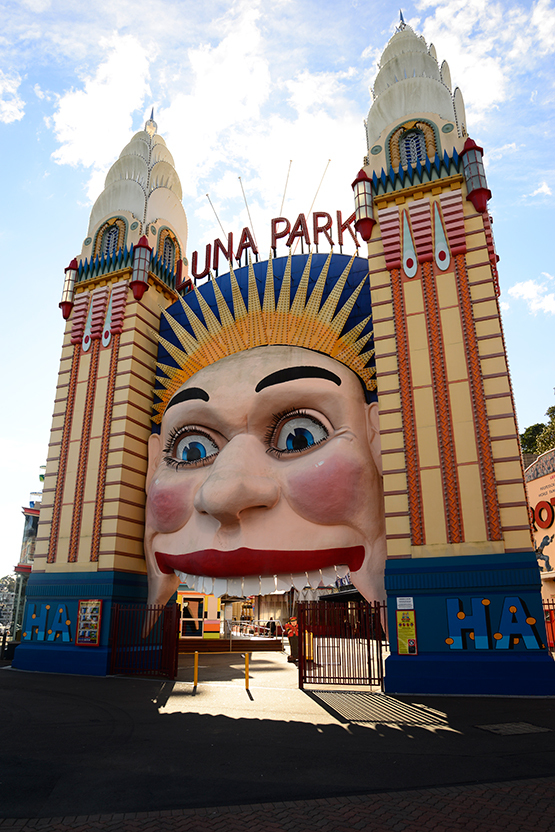 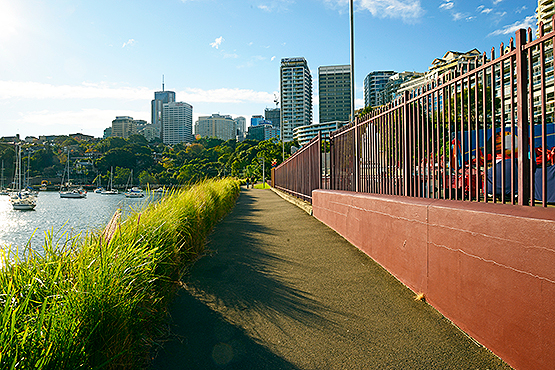 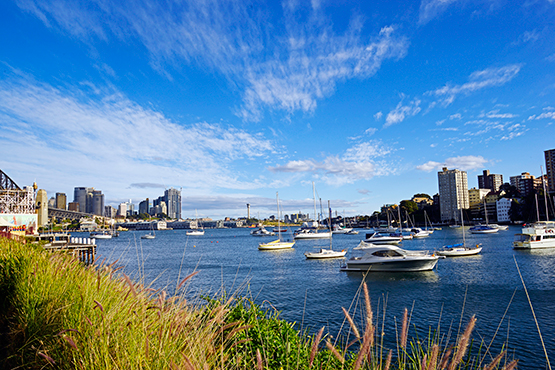 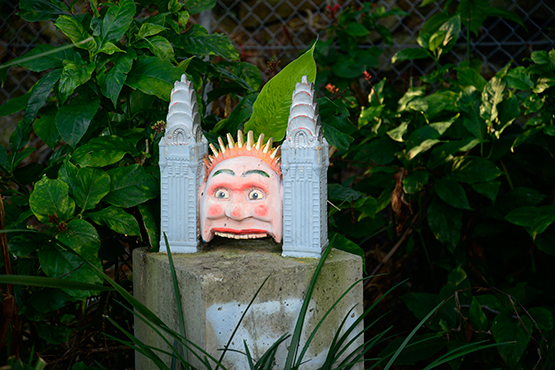 This is the caption .   Picture: © Sydney.com.au 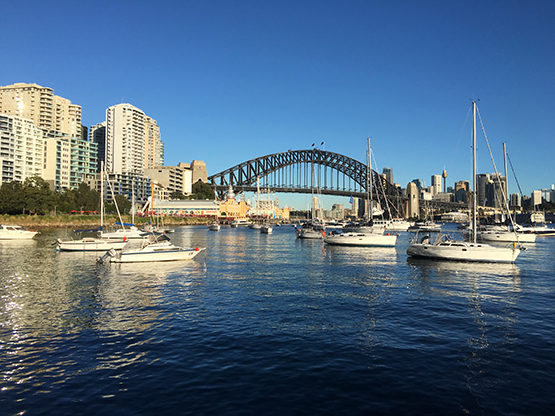 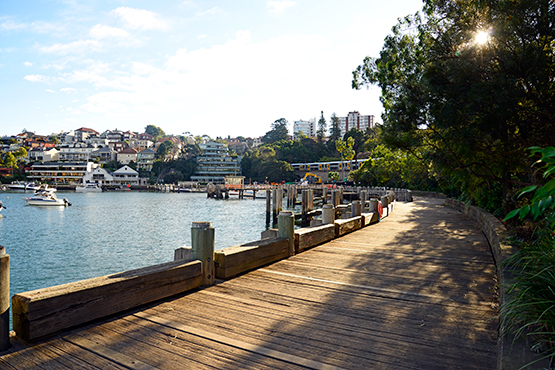 The walking path edges towards the wharf at Lavender Bay.   Picture: © Sydney.com.au 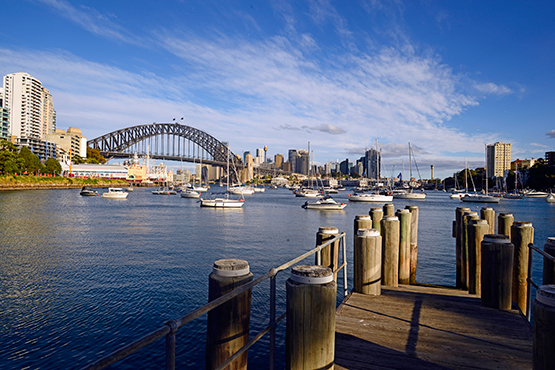 Looking back at the Sydney Harbour Bridge from one of the jetties.   Picture: © Sydney.com.au 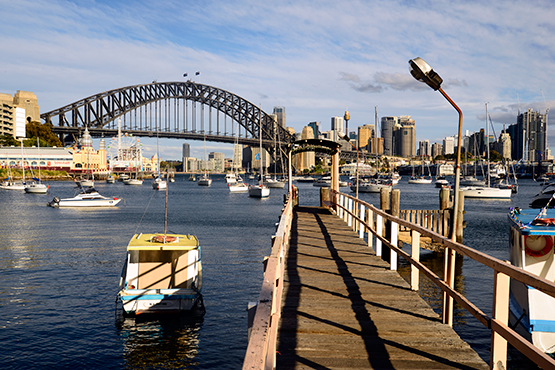 A main jetty reaches out into the small bay.   Picture: © Sydney.com.au 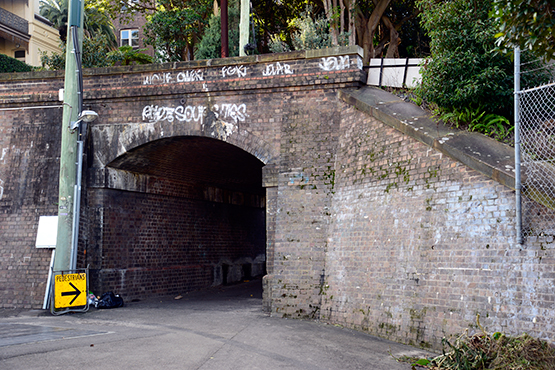 This tunnel cuts through to a set of stairs that lead up to Wendy's Secret Garden.   Picture: © Sydney.com.au 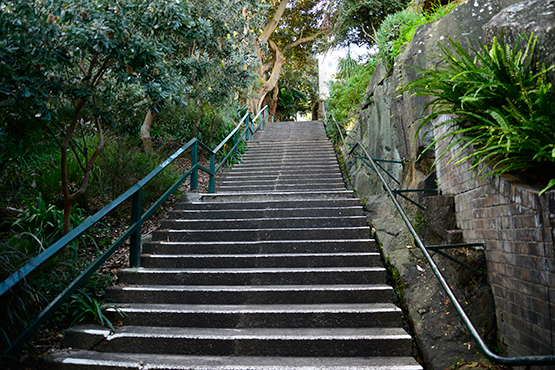 The entrance to the garden is at the top of the stairs, on the right. Admission is free.   Picture: © Sydney.com.au 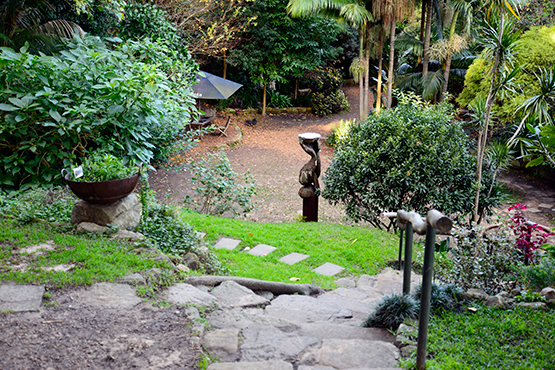 Looking down on Wendy's Secret Garden, an adventure in itself.   Picture: © Sydney.com.au