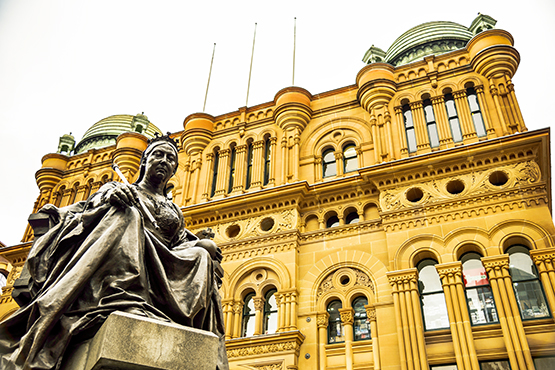 A statue of Queen Victoria is positioned in front of the building - an outstanding example of Byzantine architecture - that bears her name.

'The most beautiful shopping centre
in the world', says Pierre Cardin

The QVB is situated at 455 George Street, between Market and Druitt streets.

The Queen Victoria Building (QVB) has been described by Pierre Cardin as "the most beautiful shopping centre in the world".

This outstanding example of Byzantine architecture, which occupies an entire city block - bounded by George, Market, York and Druitt Streets - was completed in 1898 to replace the original Sydney Markets. Later, it accommodated a concert hall, which eventually became the city library.

The building was remodelled in the 1930s and used for different purposes, including municipal offices. In 1984 it was completely refurbished as a shopping centre, with more than 200 shops. The renovations, by the Malaysian company Ipoh Garden Berhad, were highly imaginative and thoughtful. Most important, they retained the turn-of-the-century charm of the building.

The QVB has a series of domes and domelets with exquisite stained glass windows and extensive wood panelling throughout. An original 19th century staircase sits alongside the dome.

There is a marvellous hanging clock that displays a series of mechanically moving tableaux of British kings and queens every hour on the hour. This "exhibition" is heralded by loud trumpeters and ends with the beheading of Charles I.

Permanent and temporary exhibitions have a home at different points on each level and include replicas of the British crown jewels and a highly ornamental, full-scale oriental coach. The building accomodates a series of royal paintings.

The building is a major attraction for both visitors and residents and is open every day. Shops with Old-Worlde shopfronts are located on three levels and here you will find some of the most interesting shopping in Sydney, shops such as New Guinea Arts, which has a remarkable array of native artefacts from New Guinea.

If you are interested in Shopping while enjoying the old world charm of the surrounds, then you will also enjoy visiting The Strand.

Pictures of the QVB 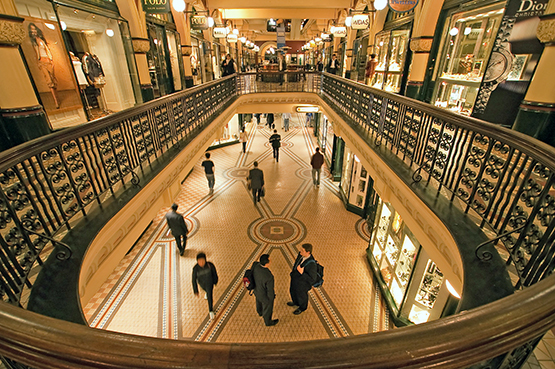 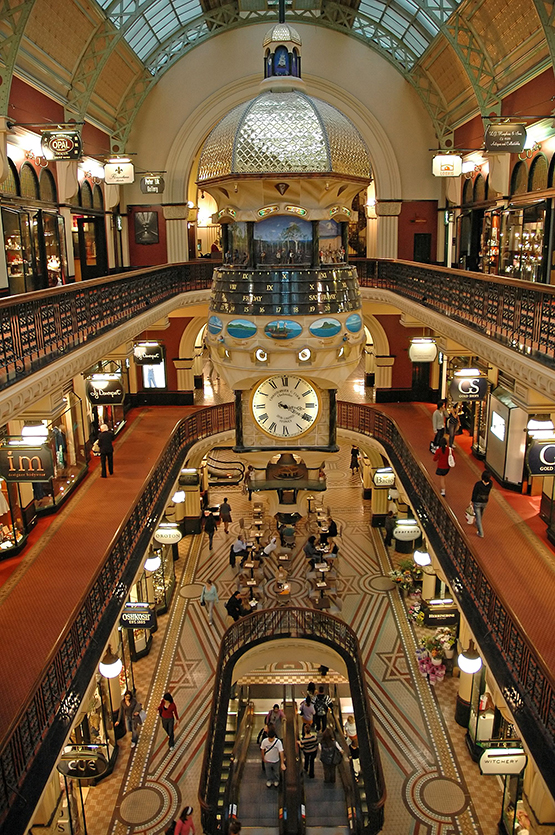 The hanging clock that displays a series of mechanically moving tableaux of British kings and queens every hour on the hour.   Picture: © rorem, 123RF.com 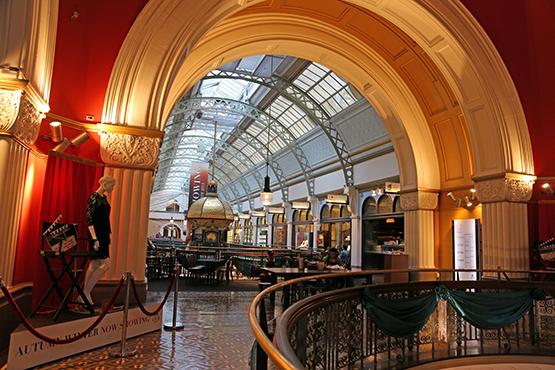 Grand plaster archways herald the way to the mezzanine floor and its metal and glass ceiling.   Picture: © Toby Yim, 123RF.com 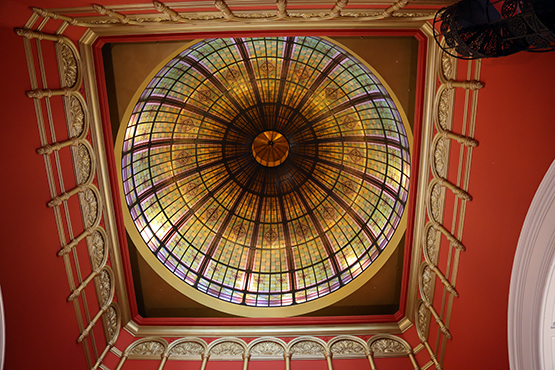 The exquisite stained glass window that sits under one of the QVE's domes.   Picture: © Toby Yim, 123RF.com 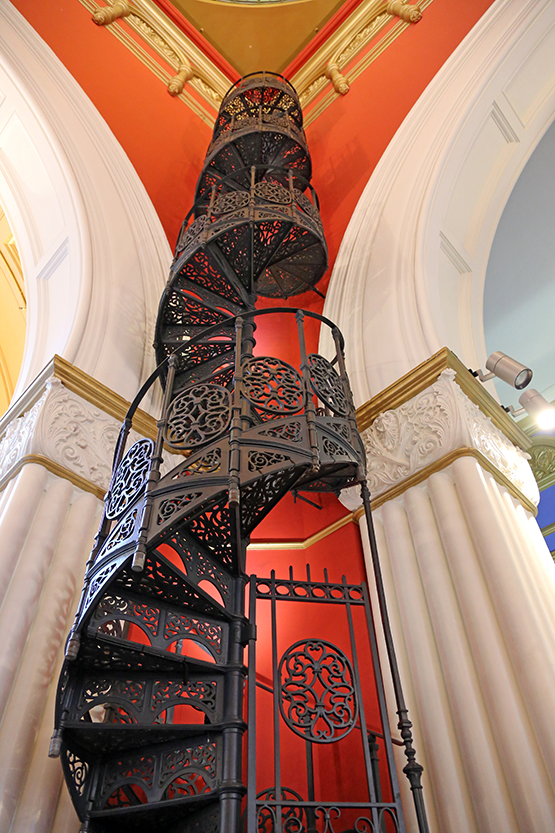 LEFT: The 19th century iron spiral staircase that rises up to one of the QVE's domes.   Picture: © Toby Yim, 123RF.com 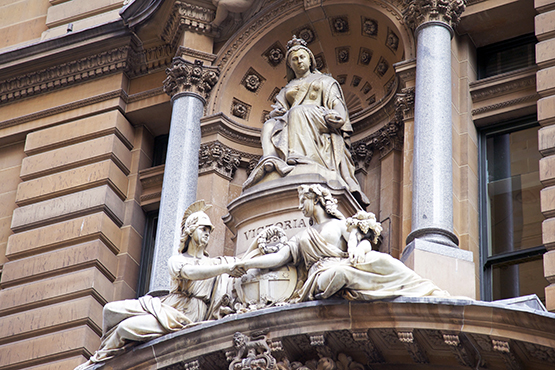 Another sculpture of Queen Victoria adorns the building. 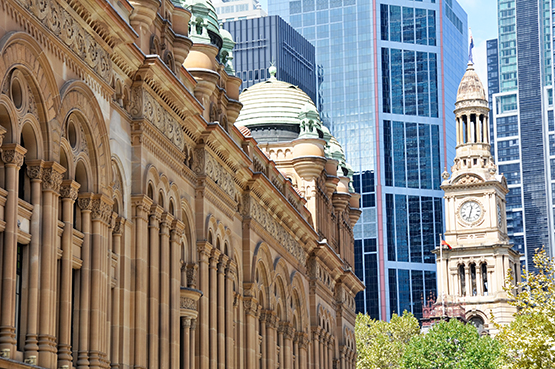 This picture shows the amount of detail in the QVB's stone walls and windows. 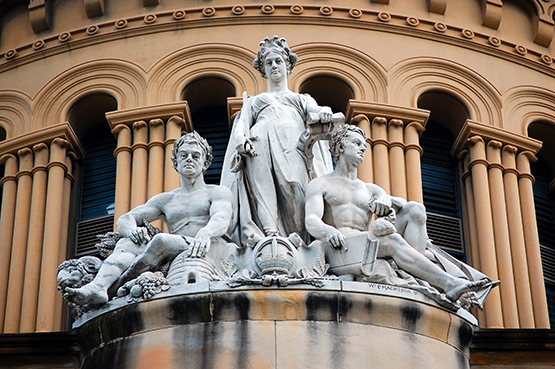 Perhaps the most commanding of all the QVB scultpures. 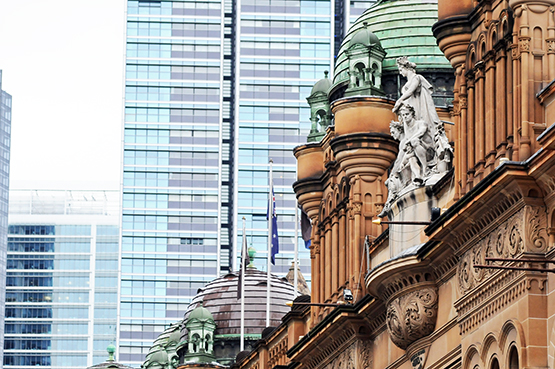 Ornate sandstone columns are clustered around the buildng's iconic domes. 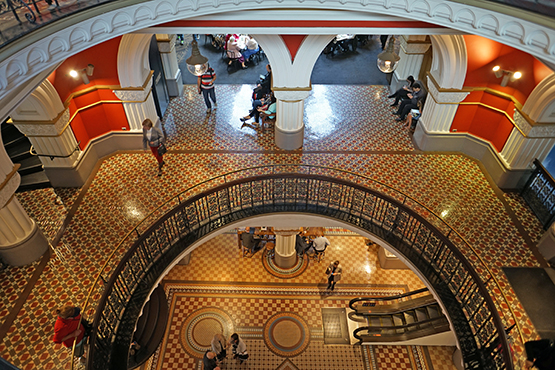 The patterns of floor tiles are different on each floor.   Picture: © Wan Chiang Tan, 123RF.com