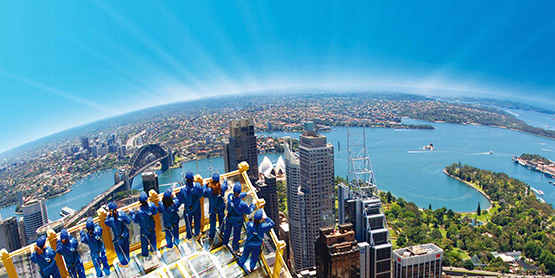 High above Sydney on a platform of glass.   Picture: © Sydney Skywalk

The skywalk is near the top of the 309-metre Sydney Tower, which is the second highest observation tower in the Southern Hemisphere.

A 45-minute tour includes access to an internal observation deck and a 4-D cinema pre-show before being taken outside for a guided walk around the outside of the tower, culminating in walking out onto a glass platform 250 metres above the city.

Guests are fitted out in jump suits with safety belts that attach to chains, thus unsuring complete safety.